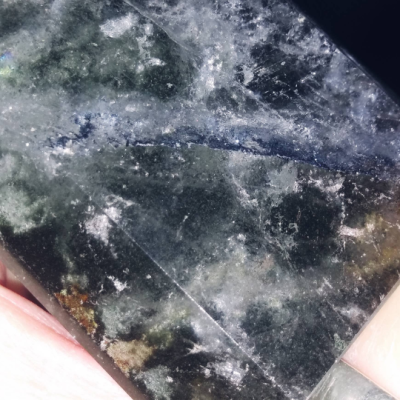 My Black Phantom with little “garden” lower left side ~ photo by i.macy

Of all the crystals I have, this is probably the most precious.  It is a Black Phantom Quartz crystal with literally everything going on within it.  It can be called a “Garden Quartz” or Lodolite Quartz because it has a small “garden” growing within it… just a small one, mind, and my phone camera doesn’t pick it up well, therefore, you must take my word for it.  But the thing that gives me the chills every time I look at it are the inclusions!  There are [which I’ve tried in vain to capture] two nearly fully grown Quartz point twins within it and a third one on the opposite side.  They are smoky with clear crystals about them and they are partitioned from each other by what is perceived to be a thin black slab… these would be phantom inclusions of carbon or manganese, often echoing within the body of the crystal showing the form of a termination point from an earlier stage of the crystal’s growth.  It’s stunning and I only wish I had a really good camera to show you.

You may be able to see the Quartz point leaning left inside the Phantom. There is another beside it to the right ~ Photo by i.macy

Phantom Quartz crystals show the clear delineation of another completed crystal inside the main crystal. Many times, you will notice several completed crystals inside one another. In geological terms, the first Quartz crystal stopped growing due to lack of a “mother”, or SiO2 feed. During this rest time, cave dust settled upon the original crystalline structure [i.e. Quartz crystal].  When the “mother” solution was reintroduced into the cave, rather than a new and separate crystal forming [the most common process], the mother solution reformed over the original crystal, trapping and enclosing the cave dust or dirt and giving the crystal a ghostly look, thus the name phantom.

The “divide” or slab in between ~ Photo by i.macy

Otherworldly and rare, phantom crystals can be composed of a wide variety of materials including sand, clay, chlorite, actinolite and mica or iron materials such as Goethite and Haematite. ​ Phantom Quartz crystals are considered as Master Crystals because of their unique ability to represent the separate and unique lifetimes of the one Quartz crystal and its regressive properties and the ability of life after death.

As a business owner I have found that the magick of this crystal is strong toward helping me to push forward with ideas and the hard graft to realise those ideas as made objects for selling. If I’m stuck with no clear plan, this crystal helps me to focus and make a plan which will utilise ideas I may have had in the distant past but never “got around to”. The Black Phantom brings out my potential better than any other crystal in my crystals arsenal. All it need do is sit on my desk near me and I am remembering things I have thought of previously not to mention remembering things my grandparents made in their practise.  Black Phantom Quartz can enrich your life in many ways, both in learning from experience and in wealth.  It will not hurt to write what you wish for in terms of growth – spiritual, physical, or financial – and place the paper underneath the Black Phantom.

This may belong under “Healing”, but the Black Phantom allows you to rest and it also helps you to reboot from feelings of fatigue.  It can heal you in mind, body, and soul. 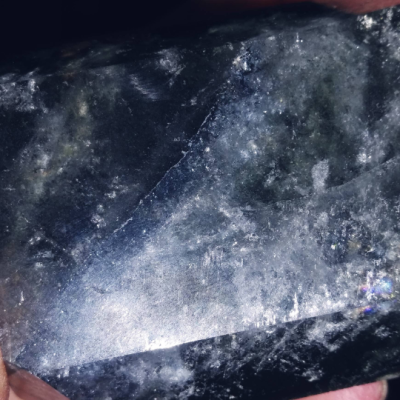 To the point! ~ Photo by i.macy

For anyone who has experienced a broken past in any way, it will help heal you from your experiences like nothing else.  For those who are interested in their family genealogy, it helps to reconcile the differences and make peace with some things you may learn which causes you dismay.  If you are suffering because of a past life issue, please use the Black Phantom.  It will help you release your self-judgement.  Its emotional healing powers are unsurpassed in my books.   And it is all you need for grounding.

After using your Black Phantom, you can cleanse it by laying it in a dish of Quartz crystal pieces or passing it through the smoke of white Sage.  It is strengthened by either sunlight, moonlight, or both.

Deity:  The Divine God and Goddess

The Black Phantom Quartz is excellent for strengthening the muscular and skeletal systems. It can be used to counter osteoporosis, fragile bones and weakened muscles. This stone can assist in strengthening the heart and lungs and supports the nervous system and myelin neural sheaths. Black Phantom Quartz are powerful stones for grounding etheric energy into the body for the healing of physical disease. It helps strengthen the nervous system and the cardiopulmonary system.

The Book of Stones, by Robert Simmons