From the Wortcunner’s Cabinet – Ginger Root 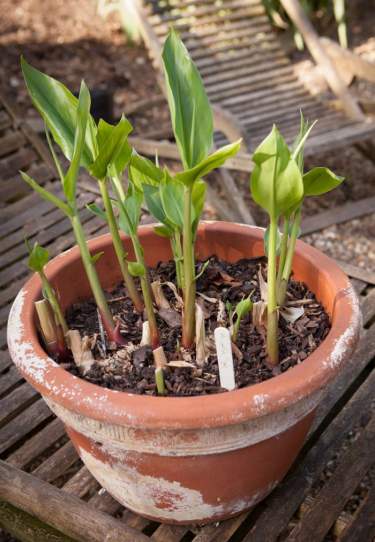 I felt now is timely to expound upon the virtues of Ginger root.  And, forgive me if this is more about health than magick, however, in the current climate, I felt all information I have should be shared.

The English origin of the word, “Ginger”, is from the mid-14th century, from Old English gingifer, from Medieval Latin gingiber, from Greek zingiberis, from Prakrit [Middle Indic] singabera, from Sanskrit srngaveram. Ginger originated from Southeast Asia. It is a true cultigen and does not exist in its wild state.

Though it is grown in many areas across the globe, Ginger is among the earliest recorded spices to be cultivated and exported from southwest India.  India holds the seventh position is Ginger export worldwide, however, is still the largest producer of Ginger in the world.

There are many ways in which to use Ginger as magickal currency.  One I only just picked up on recently is one for health [although Scott Cunningham has mentioned it]:  Chew some [cleaned] root and spit it on the source of the ‘sicknesses’ to banish it [be it a part of a body, a photograph of the sick person etc].  Take that, Covid-19!  And, in the Pacific, the Dobu Islanders do the same to ward off incoming storms.  I have no recorded proof that either thing works, but when things are dire, we witches want to throw all we can at the problem, don’t we?

Ginger is used a lot in love spells. It is one of the ingredients in our Love Witch Bottle we sell.   Just drinking a cup of Ginger root tea will add power to any spell you perform.

And, Ginger features predominantly in money and success spells.  Whole Ginger root can be planted by your front door to welcome money into your home or you can carry either powdered Ginger or a piece of Ginger root or dried Ginger in a pocket to attract money to you.

For a lusty weekend with your beloved, prepare a Ginger-infused wine for the two of you!

You can burn the root of Ginger and consecrate your ritual tools in the smoke or use it to break hexes.

Simply chewing Ginger root can imbue you with stronger magickal power and capacity.

Any of you of a certain age may remember your mother giving you a cup of steaming Ginger tea for an upset stomach.  It is absolutely spot on for nausea and any tummy upset, including morning sickness.  Nicholas Culpeper did write a bit about Ginger… it was only taking hold in Great Britain when Queen Elizabeth I presented visiting dignitaries each with a Gingerbread man baked in their own likeness. Gingerbread tied with a ribbon was popular at fairs and, when exchanged, became a token of love.  Ginger root was only introduced in Great Britain around the 14th century and as far as I can tell, was not grown here.  So, Ginger, as many East Asian spices were of the time, was probably too scarce and expensive for most physicians of the time to use.  To my knowledge, the first blurb written about it was by Mr Culpeper in his The Complete Herbal and English Physician:

“Zingerberis. Of Ginger.  Helps digestion, warms the stomach, clears the sight, and is profitable for old men:  heats the joints and is therefore profitable against the gout, expels wind; it is hot and dry in the second degree.”

As almost always before I write about a herb/flower/root/bark/spice to be used in a medicinal way, I guinea-pig myself with the item.  Mind, I also do read everything about it that I can if it isn’t something I’m already familiar with, right down to recommended dosages.  I have an insatiable desire to know every detail, including research studies.  I don’t feel I should introduce anything medically viable without having done so first.  Still, that said, always do consult your GP before trying most things I speak of… although, I have come to agreement with myself that, Ginger root is 99.9% safe for anybody, with the occasional caveat, such as, don’t use North American wild ginger… much, anyway… as it can cause kidney damage.

I suppose my nana started me on this because as a healing cunning woman herself, if I started moaning about a tummy ache, out comes the grated Ginger root and ten minutes later I was sipping the tea! 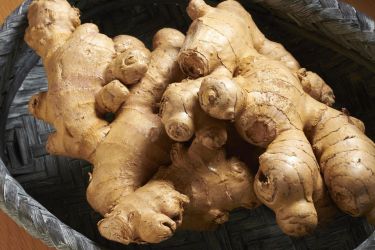 As a sufferer of arthritis, bad hip and back, and Graves disease [hyperthyroidism] and Hiroshito disease [hypothyroidism] – yes, you can have both –  I needed to look into all things which can be of benefit to me in my “elder years”.  No, I don’t really feel elderly… but you know… So! Some years ago, I had found that adding Turmeric and a little pepper to my twice daily Ginger tea would help my arthritis and has it ever!  I no longer need heavy painkillers or even paracetamol or ibuprofen [more about ibuprofen later].  Of course, I still have some pain occasionally but nothing at all like I once had.  There have been many research reports written about this and you can click here for one which I think explains most things about Ginger root best.

The brilliant bit about this concoction is that it is said to boost one’s immune system as well.  I drink mine twice per day and here is my recipe:

1-ounce grated Ginger root , steep covered for ten minutes.  I put my Ginger root in a tea diffuser/basket, but you can also just toss it into the hot water if you don’t mind Ginger bits floating round in your drink.  When ten minutes are up, lift out tea basket and add the following:

A dash or pinch of black Pepper

Stir very well and keep your spoon for you will need to stir it constantly as all of the Turmeric fails to dissolve in the water but if you stir again after each sip you won’t end up with a quarter teaspoon of Turmeric in the bottom of your cup.  It may sound like a bit of work, but the health benefits are very much worth it.

I won’t promise you that you’ll never become ill with a cold or flu if you drink this twice per day, but it can help and possibly reduce how long you’re ill for.  And I won’t tell you that it tastes wonderful because it is an acquired taste, even for someone like me whose taste buds love nearly everything.  Although, if you feel you can drink it a bit easier by adding honey, there’s no harm in it.

Whilst there seem to be no contraindications on how much plain Ginger tea one drinks, there is for how much Turmeric you ingest.  It is likely that more than one full teaspoon per day is not good for you, unless you are very ill or your Ayurvedic or holistic healer recommends more.  Many of you would like to drink one cup of Ginger and Turmeric tea and be done with it but as you know with any pain reliever, it is best to stage doses, therefore, I recommend taking a “dose” around mid-morning and the other just before bedtime.  Also, always be sure that whether you take your Turmeric in the Ginger tea or via supplement that black Pepper or piperine [a natural compound in peppercorns that make black pepper spicy] is included.  Neither Turmeric and Curcumin [the substance that gives the spice its orangey-yellow pigment] supplements cannot be absorbed properly without one or the other.

Please understand that this concoction will not cure a cold [which is of the Coronavirus genealogy] nor the flu, nor Covid-19!  But, it may, with any luck, help already healthy people with no underlying issues, feel better quicker.  I hope so, anyway.

About Ibuprofen, as promised:  The French Health Minister recently reported that Ibuprofen as a painkiller should not be used, particularly with Covid-19.  The country’s health minister, Olivier Véran, who is a qualified doctor and neurologist, tweeted on Saturday: “The taking of anti-inflammatories [ibuprofen, cortisone … ] could be a factor in aggravating the infection. In case of fever, take paracetamol. If you are already taking anti-inflammatory drugs, ask your doctor’s advice.” As per a report in The Guardian.

Health officials point out that anti-inflammatory drugs are known to be a risk for those with infectious illnesses because they tend to diminish the response of the body’s immune system.