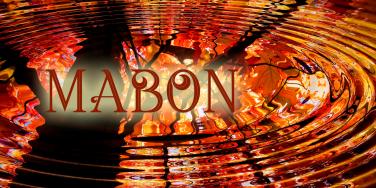 Tomorrow marks the beginning of Mabon.  It is, of course, the next to last harvesting season of the year and it is the Autumnal Equinox.  For centuries, Mabon, much like Lughnasadh, has been a time of much celebration for Pagans and other religions.  Mind, they may be celebrated much differently than one another, still, it is a time of much happiness [if the crops turned out well] and thankfulness for a good store of grain and other necessities to get through another winter. Other changes begin as the 21st will mark the time when  both the day and night is of equal length. The nights will become longer and the days shorter hereafter.  Depending upon where you live, it may be dark as early as 4 pm of an afternoon [UK] but most places are probably not dark so early. It gets made up for by staying light in summer til 9:30 – 10 pm though!

The Neo-Pagan goes by the Wheel of the Year, attributed to British Paganism and adopted by Wicca, which is appropriate enough as it clearly defines the eight-parted cycle of what the Ancient Ones just knew by the observed changes in Nature… they didn’t need a “wheel” to define what season or sabbat it was.  They could read the signs Nature gave them in the skies, the air, the trees, animals, and Earth itself. And, the shortening of days was a very good clue to them and all. I’m sure that most of us, unless we’re living in a bubble, are acclimated well enough with seasonal changes to tell when the changes are nigh. But the Ancient Ones were very precise… they had to be.  Not planting at the right time could spell disaster for their crops.  Nowadays, we have almanacs to help us understand when and what to plant, if we should be so inclined.  Whilst almanacs are very much based upon what the Ancients knew; obviously they never wrote these details down. However, they still managed to pass down this information to every generation and in time there were people who learned how to read and write and the modern almanac as we know it today came into being.  When you give thanks this Mabon, spare a word of thanks to the Ancients for passing down this invaluable knowledge.

For the Pagan, both then and now, the sabbats also proved the cycle of human life.  It was a given that we all were born, lived and changed, then died… and a lot of speculation upon what happened afterward. The Norsemen believed in a Heaven-like state called Valhalla and a Hell-like state called Hel. They also believed that in Valhalla Odin would have a great war each day where they would all fight and die again… and again… and again… well… for a Norseman this was their idea of “Heaven”, fighting and dying with honour. But many of the Ancient Pagans cottoned on to the fact that not only did plants, trees, and the like were “born” from the planted seed but would then grow well and live, then in some cases, wither and die in the latter months but come to life again in the Spring. In farming the plants did not wither and die because they were ready to but because farmers needed food for the Winter months and therefore harvested everything they planted.  New seeds would be planted in Spring or Summer as prescribed and the cycle would begin and end the same as always. The leaves on trees would turn beautiful colours in Autumn but fall to the ground in death before Winter.  Still, the tree would produce new little buds of life in the Spring.  Our Ancient ancestors began to realise that we are much the same and that our energy never expired.  We would be reborn at some point in time.  Reincarnation was believed upon for ages prior to its rise in popularity in India around 1000-600 BC.

The Greek philosopher and mathematician Pythagoras, born around the year 580 BC, stated that the soul was immortal, and after the death of the body, could own another body, sometimes an animal. Also, not to be confused with reincarnation, the Greek word metempsychosis, meaning transmigration, coined in the 5th century before Christ, when Plato, a Greek philosopher, born around the year 427 BC, taught that the soul is born many times, even for 10 thousand years, and then it parts to Heavenly bliss.  It is quite obvious to most of us now that Christians did not have the first hold on the idea of Heaven. Even the Pagans of long ago believed in a Heaven of sorts and very much understood the circle of life.

wheel of the year by Ask-Angels.com

So, why not a wheel to represent all seasons and sabbats?  Pretty ingenious idea, really.  One of the many ways we try to celebrate the sabbats is to craft things which represent the individual sabbats in our home is to create something which speaks to that particular sabbat. One of my favourites was our wheel of the year my daughters and I created many years ago from a grapevine wreath, attaching wheat to the portion representing Lughnasadh.  We had intended to add a new piece relating to the next sabbat and so on as each arrived.  Mind, we never could leave anything unfinished and ended up filling the entire wheel by the time Yule arrived.  But it was ever so pretty hung just over the opening of the fireplace!  I would love to add a picture of it for this blog but it is packed away in my lockup as there is really no more room on the walls of our “new” home that we moved to the year after.  You and your family may wish to take up this idea and do the same this year…and who knows? Maybe you won’t be so impatient as we three to the point of needing to finish it before time… or maybe you will 😊  Either way, it’s a nice Mabon project and we wish you the happiest of Mabons. Many warm blessings to all whom this way wander x

Everything worth knowing, I learned from my Nana. I'm a sixty-six year old cunning woman who practises a solitary English hedgewitch life in as near the old ways as I can. I do not sacrifice small animals, neighbours, nor eat children. I'm more interested in visiting my ancestors on hedgewalks. And, I am owned entirely by my lovely feline companion, Pippa [Lady Philipa Cattington].
View all posts by Isabella →
This entry was posted in Autumn, Business, mabon, Magic, Magickal, Pagan, reincarnation, Sabbats, Uncategorized, Wiccan, Witch, Witchcraft and tagged autumn equinox, happy mabon 2019, lughnasadh, mabon, mabon 2019, metempsychosis, Plato, Pythagoras, reincarnation, sabbat, wheel of the year, wicca wiccan. Bookmark the permalink.