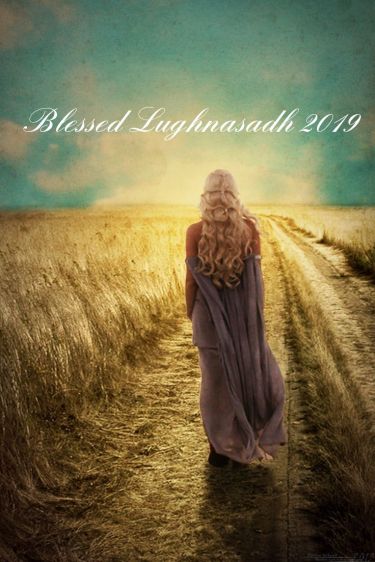 Unless you are a brand-new fledgling witchy, I am sure most of you know what Lughnasadh, or Lammas, is all about.  Obviously, it is the first harvest of the year and that in and of itself has always been reason for much merriment amongst the Pagan farming communities… but it is also a time of joy for every farming community, whether Pagan or Christian or otherwise.  That is, if the harvest was good and not ruined by too much rain or not enough rain.  We shall operate based on a good harvest for our purposes.

Most of us probably aren’t farmers apart from perhaps our wee herb gardens or flowers.  Some of us may have been reared in a farming family or had friends whose parents/grandparents were farmers.  I would say a good deal of us at the very least understand the importance of having an excellent harvest each year as this provides our sustenance.  In the early days of planting crops, our ancestors knew how to keep the land from “running out” of nutrients in the soil and how best to keep their lands fit for purpose by rotating crops and allowing the earth to rest between growing seasons.  Only in more recent history have farmers forgotten this important thing and have overworked their lands and we are all paying the price.  But did you know that the ancestors also had other ways of ensuring a good harvest each year?  You could indeed call it a kind of magick!

For instance, in the Shetland Islands, farmers believed that grain harvesting should only take place during a waning moon. They also believed this about the fall potato crop, and the cutting of peat.

At Lughnasadh, calves are weaned, and the first fruits are ripe, such as apples and grapes. In some Irish counties, it was believed farmers had to wait until Lughnasadh to start picking these fruits, or bad luck would befall the community.

In England, “John Barleycorn” represents the suffering of indignities, attacks and death that corresponds to the various stages of barley cultivation, such as reaping and malting. And any of you of an age will remember no less, the 1970 album by Traffic call John Barleycorn Must Die.  Then of course, many of us have studied the 1782 poem by Robert Burns in school, perhaps.  But Mr Barleycorn did not just come to life in 1782, for there was a Scottish manuscript from the 16th century mentioning the famous sacrificial grain.  For let us not forget, without Mr Barleycorn’s demise could we live. Nor could we make beer and whiskey 😊 This is a good time to raise a glass to Mr Barleycorn!

This is also the time for corn dollies! Where the corn dolly began is anybody’s guess, but the most prolific and intricately made ones have come from the farms of Great Britain for many, many years.  They were also known as “corn mothers”.  The pagans believed the “spirit of the corn” resided in their wheat fields – note here that the word “corn” did not refer to actual corn or “maize” as it is known in North America, but corn referred to the wheat grain in the British Isles. Hence, when you mention corn dollies to an American, they will visualise the kind made with the husks of corn/maize, rather than the braided shafts of wheat and straw as are custom in the UK.  Back to the story though, when the wheat was harvested, the early pagans believed the Spirit of the Corn was made homeless, therefore they would fashion a kind of “doll” out of the last sheaf of wheat and leave it in the field for the corn spirit to inhabit until winter was over and replanting began. And, every area of the UK has its own particular design.  If you are an older person in the UK and have been active in wheat farming, you may be able to recognise the corn dolly from one county to the next on sight.  Each one is special, and the design is handed down from generations in most cases.  I find they are wonderful to add to my Lughnasadh altar and if you are interested in having one for your altar, you can either learn to make one or you can purchase one.

Lughnasadh is a fabulous time to celebrate with friends and to make new ones. If you live near the eastern part of the UK, here is a celebration you may be interested in at Kallima Wellbeing Centre, Basildon, the Lammas/Lughnasadh Moot 2019.

If you don’t have a celebration in your area [although it would be hard to imagine!] you can celebrate at home quite well.  However, you choose to celebrate, I hope you have a very Happy Lughnasadh/Lammas and warmest blessings to you and yours. x

Everything worth knowing, I learned from my Nana. I'm a sixty-four year old cunning woman who practises a solitary English hedgewitch life in as near the old ways as I can. I do not sacrifice small animals, neighbours, nor eat children. I'm more interested in visiting my ancestors on hedgewalks. And, I am owned entirely by my lovely feline companion, Pippa [Lady Philipa Cattington].
View all posts by Isabella →
This entry was posted in Business, Earth, folklore, Lore, Lughnasadh / Lammas, Magic, Magickal, Pagan, Sabbats, Uncategorized and tagged celebrating lammas, celebrating lughnasadh, corn dollies, corn dollies uk, corn mother, first harvest, happy lughnasadh 2019, John Barleycorn, John Barleycorn Must Die, Lughnasadh / Lammas, lughnasadh moot, pagan, spirit of the corn. Bookmark the permalink.