The Ogham alphabet was derived from sacred glyphs and it is mainly associated with Ireland and the Irish Gaelic language.  It is, of course, often claimed by others, such as the Welsh traditions which says that Hu the Mighty invented the Ogham ‘for he first applied vocal song to strengthen memory and record’.  This is even more plausible than where, in The White Goddess, author Robert Graves claims the tree alphabet as partly his invention.  I don’t suppose he would ever think that people would learn, if they had not already, that the Ogham alphabet would turn up marked on trees and stone monuments, dating back as early as the first century AD.  It is also plausible to understand that the Ogham alphabet was used all over the British Isles by Druids and the Bards alike so it could have been a collaboration of Irish, Welsh, Scottish, and English people.  And, there are other claims that the Ogham was around before the first century AD, some saying it goes back to the first century BC.  I suppose we will never really know definitively but it is enough to know that it is part of a much more ancient language than Robert Graves may have claimed.

All we need to be concerned with is understanding the Ogham…at the very least, in layman’s terms, so that when you see something regarding the Ogham you can understand how it fits in with the trees used and its basic meanings.  If you wish to learn to cast the Ogham for divination, there are a good many books which are very thorough.

You’ll often see the Ogham called the “tree alphabet” and so it is.  That is because each Ogham is assigned to a tree/shrub/bramble.  It is a form of encoded wisdom which was once strictly passed on by initiation only. The Ogham itself is very magickal; it aided healing, science, divination, and initiatory learning through its potent wisdom based on trees, plant, and animal growth by their seasonal energies, not to mention its great spiritual power.  Each Ogham letter has its own sound[s] to convey its meaning…it is said to be multi-layered in that it represented the sounds of nature, the air, the earth, animals and plants…all the sounds which veritably create music… can you imagine? The learned ones in their time communicating in this way? It lifts my spirit to imagine it. Music is recorded when written on an Ogham stave.  Timeless.

It would be difficult then to imagine only one person creating the Ogham alone, so it is of my highest opinion that many are responsible for its being.

To understand why each Ogham ‘letter’ is so assigned, we must see the tree groups as the people whom invented this magickal communication did.  There are four main groups:  Chieftain, Peasant, Shrub, and Bramble.  The Chieftain trees are Oak, Holly, Yew, Ash, Pine, and Apple with Apple being most frequently the host of Mistletoe, Mistletoe is known as the ‘hidden tree’.  The Peasant trees are Alder, Willow, Hawthorn, Rowan, Birch, Elm, and Beech.  Sometimes Silver Fir is included, depending upon whom is writing.  Then, there are the Shrubs which consists of Blackthorn, Elder, Aspen and the Poplars, Juniper, and Reed with the possibility of Maples.  Lastly, the Brambles:  Dog-Rose, Bramble, Broom, Heather, Ivy, Vine, and possibly Honeysuckle, Fern, ‘Traveller’s Joy’, and The Spindle Tree.  Each tree, shrub, and bramble and its associations, which I have not listed at this time, were created by the authors of the Ogham.  The Irish Gaelic letters shown in the below illustration are in alphabetical order but not in their seasonal order. 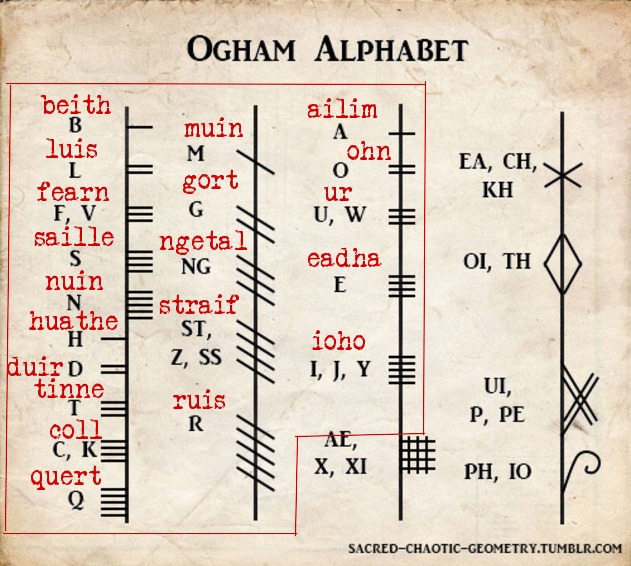 As room did not allow, I did not attach the tree name to each of the twenty oghams on the chart which are mainly used for divination purposes, therefore, I shall list them here:  Beith – Birch tree, Luis – Rowan tree, Fearn – Alder tree, Saille – Willow tree, Nuin – Ash tree, Huathe – Hawthorn tree, Duir – Oak tree, Tinne – Holly tree, Coll – Hazel tree, Quert – Apple tree, Muin – Vine, Gort – Ivy, Ngetal – Reed, Straif – Blackthorn, Ruis – Elder tree, Ailim – Pine tree, Ohn – Gorse, Ur – Heather, Eadha – Poplar tree, Ioho – Yew tree.  I have drawn a red line around those which are used in divination, leaving the five combination vowel letters to the side for another time. You may be familiar with this if you have read my blog, What’s Your Birth Tree is the New What is Your Star Sign. 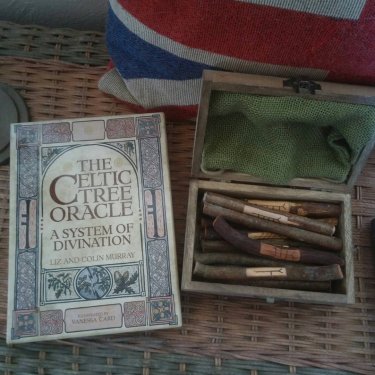 There is so much more to be said about the Ogham but in this writing,  I am only presenting what is used in divination because so many people ask how they are used for this purpose.  Of course, if I had a lot of time, I could explain it all, however, I do spend much of my time writing or creating things for our shop and simply can’t write about it all.  In olden days the Ogham alphabet was a way of communicating – people even created a sign language with it – and for recording.  It was a secret language of the Druids and the Bards.  Nowadays, it is used nearly exclusively for divination.  In this respect, the trees themselves, whilst providing anchorage for the whole system are regarded as doorways through which to enter deeper wisdoms. If you want to learn how to divine using the Ogham, it would be a good start to buy or make a set of Ogham for yourself and buy a book or two such as Ogam: Weaving Word Wisdom, by Erynn Rowan Laurie or a less expensive option would be to purchase The Celtic Tree Oracle: A System of Divination by Colin Murray where you can divine with oracle cards.

I hope this has clarified a few things for some of you who queried.  If it has been of interest and help to you, please share via the social media buttons below and would love to read your comments.  Many thanks for reading and warmest blessings to all whom wander this way.. x

The White Goddess, by Robert Graves