A little child shall lead them, Isaiah Chapter 1, Verses 1 through 10.

Any EastEnders fan will laugh and call me Dorothy Brannan, Mrs.  Don’t worry, I have not turned into a God botherer.  But, along the way in my witchy life, I have picked up a few Biblical bits I like.  And this verse I think suits this particular blog down to the ground.  It is about a legal case in the US called Juliana v United States – Climate Change Litigation. 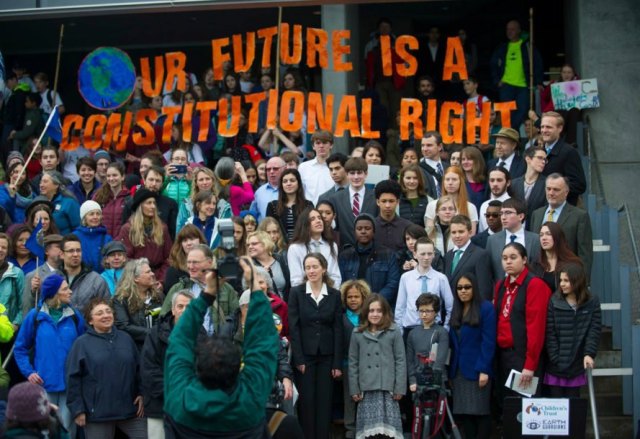 Our Children’s Trust ~ Image from inhabitat.com

The basis of the litigation as you can already tell is for Climate Change / Global Warming.  It was not brought forth by a business or a scientist or anybody of some notability as one might think.  It was brought forth by one nineteen-year-old woman [I almost said “girl” which, in my years, I still think of people under 40 as “kids” sometimes, and I apologise] and twenty other youthful plaintiffs, the youngest being only eleven.  The suit was started in 2015.  Only recently did I hear of it, but then that’s not surprising as most news to do with Climate Change over the last few years gets pushed to the back pages whether in a newspaper or Google News online…only now, however, it is front and centre where it should be since the scientific boffins have been raising the alarm more intensely.

The lawsuit is formally against the United States and several of its executive branch positions and officers, also formerly, including President Donald Trump and former President Barack Obama. The lawsuit asserts that the government violated the youths’ rights by allowing activities that harmed the climate and sought the government to adopt methods for reducing carbon dioxide emissions. The lawsuit is at the leading edge of an area of environmental law referred to as “atmospheric trust litigation”, a concept based on the public trust doctrine and international responsibility related to the government’s control over natural resources in the interest of public benefit. While previous lawsuits in a similar vein have been dismissed by US courts, Juliana v. United States gained attention in 2016 when US District Court of Oregon, Judge Ann Aiken, upheld the idea that access to a clean environment was a fundamental right, allowing the case to proceed.  ~Wikipedia

Whilst other’s lawsuits have been denied, this one keeps going.  This gives hope.  Still, there are no provisions in the United States’ Constitution declaring any citizen’s right to a clean environment, low-levels of CO2, low levels of methane, clean water, or anything of the like. If anything ends this suit it would probably be this.  There is nothing America holds dearer than its Constitution…

Then again, when the American Constitution was written, there was nothing but trees and fertile ground, fresh air, and probably very normal seasons.  There were no massive Industrial Revolution factories with stacks belching out coal emissions, nor millions of cars roaring round super-highways spending methane and carbon like a reckless neo-millionaire spends money.  Nor that many farting cows…ha ha…a little levity.  Would, if the US founding fathers had a vision of their future home, have they written in an article or law providing all citizen’s rights to a clean environment?  We shall never know.

So now, those of us whom are becoming familiar with Juliana v US, are waiting with bated breath.  I, for one, pray that Juliana and her twenty comrades wins.  If they do, this will, of course, be a major upheaval in the way things are currently done in the US.  And, if you ask me, being one of the largest nations in the world, this would be a very good thing.  I’m quite sure to their conservative party, the Republicans, this would not be welcomed, still, they are parents and grandparents as well.  Will they not welcome changes which will ensure a safer world for their children, grandchildren, and descendants for centuries to come?  I should like to think so.

What will happen if the plaintiffs win for the advancement of Climate Change? Then the government of the United States must change the way things are presently going to make the environment safer for its inhabitants.  It won’t all happen immediately but plans and laws will need to be put in place [yada yada…bureaucratic red tape] and things will get messy before they get better, however, this is something that is needed to get the proverbial ball rolling.  Still, even if the government “wins” [no one wins, really], a dent has been made on the side of good because of Juliana, the Trump administration is on record admitting the truth about Climate Change, not only as it has been cast by the Juliana plaintiffs, but by the Administration’s own scientists and most of the world’s scientific community.  This is the one major reason that I believe Juliana v US has managed to press on so far and has not been dismissed as other suits have been.  The US government, despite Trump’s tweets to the contrary, have admitted that Climate Change is real and needs to be addressed.  This can, at the least, be helpful for future litigations.  Oh, yes…it’s very helpful.  With any luck it may set forth a precedent for the youth of other countries to go boldly against their country’s government if it is not readily in favour of doing anything about Global Warming for their citizens.

And we were led by the little children. Bravo to the youth of the world.

Many thanks for reading my blog.  I appreciate everyone taking a bit of time to read my ramblings and I hope you find something of interest and of possible help to you.  Please share via the social media buttons, if you will, and I love to receive comments and answer to all.  Warmest blessings to all whom this way wander x

Everything worth knowing, I learned from my Nana. I'm a sixty-four year old cunning woman who practises a solitary English hedgewitch life in as near the old ways as I can. I do not sacrifice small animals, neighbours, nor eat children. I'm more interested in visiting my ancestors on hedgewalks. And, I am owned entirely by my lovely feline companion, Pippa [Lady Philipa Cattington].
View all posts by Isabella →
This entry was posted in Business, Climate Change, Global Warming, Uncategorized and tagged A little child shall lead them, atmospheric trust litigation, carbon dioxide emissions, clean environment, clean water, Climate Change, climate change lawsuit, climate change litigation, Global Warming, Judge Ann Aiken, juliana v united states, juliana v us, juliana vs us, juliana vs us plaintiffs, low levels of methane, low-levels of CO2, our childrens trust, President Barack Obama, President Donald Trump, US District Court of Oregon, witchy. Bookmark the permalink.