From the Wortcunner’s Cabinet – Cloves

The name “clove” comes from the French word for “nail”.  They do look a bit like small nails, indeed!

Cloves are one of the spices, along with nutmeg, so highly prised that it has started wars. The Dutch monopolised the nutmeg trade and kept it cantered in the Moluccas. They went through great lengths to preserve their monopoly. During the Spice Wars of the 17th and 18th century the Dutch uprooted groves of nutmeg and cloves trees to keep prices high and cut their competitors out of the market. Dutch settlers were given slaves to run their plantations but were told they could not return home to Holland and were required to produce cloves exclusively for the VOC at fixed prices. Seventy large plantations were established mostly on Banda and Ai islands.  Seen here is the world’s oldest clove tree, named ‘Afo’, located in Indonesia, and photographed by Peter Van Eijk for the BBC Magazine.  Afo is estimated to be between 350 to 400 years of age, making it a survivor of the Spice Wars.  Now, sadly, Afo is reduced to a stump and a few bare branches, thanks in part to villagers needing firewood.

On to happier clove stories…..and the magickal ways to use cloves.

In magick spells, cloves are traditionally used to invoke prosperity, protection, exorcism, and purification.  Its scent helps with boosting confidence and expanding one’s thoughts. Cloves produce spiritual vibrations and it cleanses. It can be burned to prevent gossip about you. Cloves have also been worn to attract the opposite sex.  Wear in an amulet or charm to dispel negativity and bind those who speak ill of you. Cloves strung on a red thread can be worn as a protective charm.  We include a clove in both our Protection Witch Bottle and our Prosperity Witch Bottle, and I am presently preparing an Empath Rescue Witch Bottle by request which will also use clove.

Burn cloves in a crushed form as part of a loose incense to attract riches, drive away hostile and negative forces, to produce spiritual vibrations, to purify the area, or to stop others from gossiping about you.  Be sure to do any kind of prosperity spell work during the day of Jupiter [Thursday] and the hour of Jupiter for best results.

To prevent people from spreading rumours about you, push clove stems into a red candle and burn.

Worn or carried, cloves attract the opposite sex and brings comfort to the bereaved. This is a particularly delightful spice to include in your kitchen magick. Although not green in colour, its function as both a familiar kitchen spice and bringer of magick has it listed as a Green Herb/Spice.

Cloves are useful for bringing a sense of kinship to a social gathering; placing them in a potpourri in the room where people are gathered or using in loose incense is divine. Another use for cloves in loose incense is for those who read the tarot or do any kind of divination work as they help along ones’ ability to be more psychically sensitive.  Cloves are particularly useful in incenses for astral projection work. Putting cloves into your tea before going on an astral journey is helpful as well.

As always, cloves like many other herbs and spices, are very useful in poppets and sachets for any of its powers.

Used for colds and insomnia, cloves have  been used by cunning folk and doctors for centuries.  Growing up, when one of us had a toothache [too many sweets can decay a tooth badly!] a clove would be placed on – or inside of a tooth if it had decayed – to cure a toothache as it is a natural pain reliever, owing to cloves containing methyl salicylate, as well as the anaesthetic eugenol.  I can attest to this working.  In a similar idea, the Chinese chewed cloves to freshen their breath. 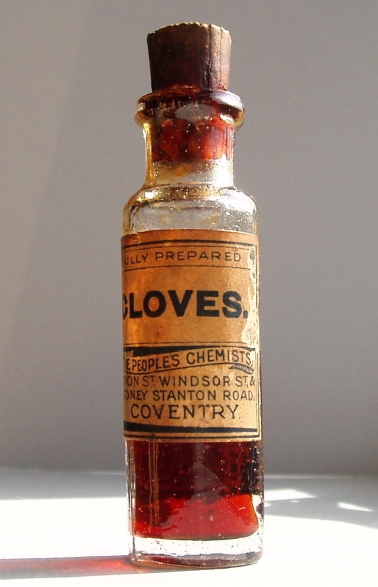 Clove oil has been an essential part of any doctor’s or cunning woman’s medicinal tool kit since oil could be distilled from a clove.  It is both antibacterial and anaesthetic. You can rub the oil directly on your gums to numb a toothache, only be sure to only use real clove oil and not clove essential oil which is diluted with carrier oils.  Steep clove buds in a tea to improve digestion, prevent and relieve flatulence, and to relieve nausea and diarrhoea.

Be sure to put a drop of real clove oil inside your elbow to test for sensitivity before swabbing your gums with it.

Many thanks for reading my blog.  I hope it has been helpful to you and enjoyed.  Please share via the various social media buttons below and a like and a follow would be very much appreciated.  As always, I welcome questions and comments and always answer shortly.  Warmest blessings upon all who wander this way x

2 Responses to From the Wortcunner’s Cabinet – Cloves