I learn something new all the time and  I like that.  But what I learned this week, after thinking I knew all the trees native to the UK, is that the Fir tree is not a native tree! Not even the stunning Fraser Fir which sounds like it could very well be a Scottish tree, probably because it was named after the Scottish botanist John Fraser [1750–1811], who made numerous botanical collections in the region where he found the Fir in the Appalachian Mountains in the southwestern United States.  The equally beautiful Douglas Fir has been growing in Great Britain since around 1827 when it was introduced to the UK in 1827 by Scottish botanist David Douglas.  Amazingly, it can grow to about 55 metres high and can live to be around 1,000 years of age.  It thrives mainly in the western UK where rainfall is higher. 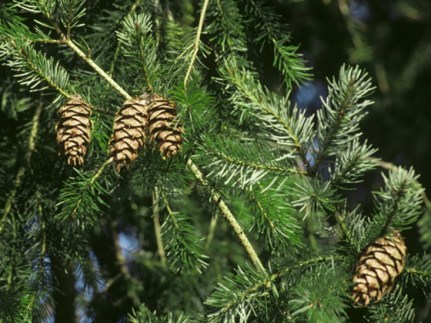 The Douglas Fir came from the US with a bit of Native American folklore for you, per the Woodland Trust says, “A Native American myth describes the unusual pointed cone bracts as the tail and hind legs of mice. It was said the mice hid in the cones to escape forest fires.” I find that disturbingly funny because apparently, the mice ended up as pine cones [who would ever think!] and apart from that it seems surreal that forest fires would have happened pre-global warming.  Of course, they would do from untended campfires or flaming arrows, I suppose. What else is very cool to find out is that Fir cones respond to rain by closing and the sun by opening. Something else I never knew!

Because of the opening and closing of the Fir tree cones, it is said the Celts and Druids also recognised the Fir to be a portent of weather conditions. They noticed that the cones would open to the rays of the sun, and close against impending rain. This lent meanings of prophecy and perception to the long list of symbolic meanings of the Fir. I am beginning to think, however, as far back as the Celts and Druids go, this information may have been about Pine cones as before-mentioned, the Douglas Fir tree was not naturalised in Britain until 1827. Still, if one cone can do this, I imagine all may do so.

It is also said that legend has it that Firs were markers for important grave sites for the Druids and Celts. It is said that even from a great distance, certain firs could be identified as the markers of great chieftains and heroes among the Celtic people. Thus, the Fir is also considered a symbol for reverence and remembrance to brave souls that have passed on to the Other-worlds.  Again, this may have begun with the Pine tree as it also grows mightily tall and has been here longer than the Fir.  I must investigate this further.

“When given the tree sign of Fir [Jan 2-11 / Jul 5-14], one is eager, practical, and dedicated to achieving their dreams, yet reasonable and logical when necessary. They give of themselves completely, after much thought.” from What’s Your Birth Tree is the New What’s Your Star Sign

There has been much debate over the tree representing the ogham, Ailm, which is for Scots Pine.  It had been assigned in The Ogham Tract to the “Fir” tree.  But so were others.  Author Robert Graves named the tree representing Ailm as Silver Fir based on the above.  However, the Silver Fir was not introduced into Scotland until 1603 but the Scots Pine is native to all of  Britain, therefore, we believe [like the story about the Fir cones] that it was the Scots Pine originally meant to be the tree for Ailm.

No matter what, the Douglas or the Fraser Fir always makes a stunning Christmas tree! And, as we can’t burn a traditional Yule log in our fireplace, one or the other is always chosen for our Christmas tree.  With its permission, of course.  And please dispose of your tree after holidays responsibly.  Save the needles for spell work and cut up the trunk and limbs for other magickal work or to make something with.

Fir is one of the nine sacred woods burned in the Beltane fire which includes Apple, Birch, Oak, Rowan, Hawthorn, Hazel, Willow, and Vine.  Each has its representation and Fir is that of Immortality.  For this reason, it makes sense to use Fir in any spell work dealing with healing, ancestral work, and past life regression; the Douglas Fir Tree encourages you to stand with your own power, solidly rooted in your legs like tree trunks. This helps you to ground your ideas and step forward with practical action.

For blessings, gather fir needles and cones. Tie the needles with a thread, then burn them in your cauldron [safely, please]. Pass the cones through the smoke, thinking of your blessings.  Place the cones in a conspicuous place where you will be reminded of your blessings and give thanks.

Fir is known as the Birth Tree. The needles are burned at childbirth to bless and protect the mother and baby.

Fir resin can be used to seal a spell.

Fir trees are one of several trees that symbolise immortality.  You can substitute the Fir for other trees that a spell may call for if other kinds are not available to you.

Simmer the fresh needles in a light carrier oil or water to lift negativity in your home.  Dry Fir needles work wonderfully in loose incenses for spell work.  Of course, the needles, fresh or dry may be used in sachets or poppets for spells to do with prosperity, protection, and clarity of vision.

The inner bark of Fir was used to treat colds and fevers.

Balsam fir resin has been used as a cold remedy and to seal wounds and the needles can be steeped in water as an infusion for a source of vitamin C.

A bath tea of fir needles is helpful for rheumatic conditions.

A de-coction of white fir bark and needles can be drunk to help with chest colds and similar complaints. Essential oil of fir can be added to chest rubs to help relieve congestion.

Before using fir, do a skin patch test to check for sensitivities.  And, as always, unless you are a trained holistic healer please check with your GP before trying any kind of self-healing information from this blog or any online source.

I hope you have enjoyed this writing about the Fir tree and find it helpful.  If you have, please share via the social media buttons below and give the blog a like.  Many thanks for reading and warm blessings to all who this way wander. x

2 Responses to The Magickal Fir Tree