How Do I Deal with Fear?

How do I deal with fear, indeed.  Many of us, no matter how intelligent… no matter how ‘tough’, no matter how young or how old, we all seem to have that common denominator:  Fear.  And often I am asked, ‘How do I get rid of fear?’.  You don’t, my friends.  In case you don’t know, fear is one of those built-in things we have that, for no matter how hard we try, we can never 100% rid ourselves of it.  But that’s alright.

You’re mad, you are thinking now… it’s alright to go round feeling as though fear just hangs over you like a rain cloud? No, not quite that way, but I’ll explain.

People have had fear built into them since the first of mankind walked the Earth.  It was necessary to keep them sharp and on watch for natural enemies like huge animals what might eat them to other tribal people who might want to take over their patch.  But early mankind was most likely much simpler thinking and once they had seen off the object of their fear, they relaxed and felt happy.  They did not go back into their cave or hut and ruminate about the next thing that could happen to ruin their happiness.  As far as they were concerned, it was sorted. Until the next time.

As time progressed and religion began taking shape, early Pagans feared their Gods and Goddesses.  Anyone would do when your God was the God of lightning and storms.  The first time you saw a mate struck by a bolt of lightning, you would be fearful of that God, wouldn’t you?  Perhaps that is where sacrificing one of your fellow tribe came from…Let’s give Thor/Indra/Zeus one of our own first and perhaps he won’t take another one in that manner again.  The Ancient Ones had to kind of make it up as they went in many cases but suffice it to say, it is probably how they handled that kind of fear.  But much like their ancient ancestors they would also feel fear when fighting off enemies, then, they would go back to a relaxed and happy state once they won the battle.  Not many would sit at home and start worrying about the next time he or she had to go to war.

The point I’m making is, until recent-ish history, say, over the last two-thousand or so years, people were able to deal with each fear as it came and then relax – at least for a while.  People began living in fear in earnest when Theodosius passed legislation prohibiting all pagan worship [c.392] and it did not improve when the Crusades began c.1095 and the Inquisition began [12th century].  We then added to our natural enemies, occasional human enemies, and fear of our Gods with the fear of literally everyone, for no one really knew who would be against or for them.  We were becoming trapped into an endless cycle of constant fear which has had devastating results upon mankind individually and together.

Is it any wonder we are fearful?

So… how are we meant to subdue Fear? People pray for it to go away.  It won’t.  People think they are not brave if they are fearful… not true at all because if you can still push yourself to do a thing no matter how afraid you are then you are considered very brave.

“Human beings face a multitude of difficulties and dangers which must be confronted if they are to live a human life.  The human body is extremely vulnerable, always exposed to the possibility of accident, illness, pain, and death.  Yet, people are not usually obsessed with these undoubted dangers, and life would be scarcely possible if they were.  All pleasure in life would be lost were we overwhelmed by all the actual and possible dangers that surround us.”  ~ John Casey

In Mr Casey’s Pagan Virtue: An Essay in Ethics [1990], he goes on to describe how he “might” rid himself of fear by virtually pretending there was no danger from the item which causes the fear in him.  We all know that is no good.  If the spider which you are pretending to be not dangerous really is, then you are not allowing Fear to do his job.  You might want to back away from that spider!  This appears to make one think it is alright to cheat Fear of his due.  I’m afraid Fear may redouble his efforts on future scares in that case.  Casey goes on to say that he might do better at ridding himself of fear by having more self-confidence.  Ah… well, in theory, that sounds smashing, still, in practise, it is impossible.  I know a good many people with bags of self-confidence, however, they are visited by Fear now and again.  As well it should be. And I won’t go on with Mr Casey’s dissertation as to when he begins saying that he must develop anger to dissuade Fear, I closed the book.

What Mr Casey seems not to have learned by 1990 is that Fear is a part of everyone.  Fear is not going to be “gotten rid of”.  Would you chuck out the part of yourself that causes you not to step off a ledge? The part of you that says “RUN!” when you need to get out of the way of something or someone barrelling toward you?  The part of you that stops you from getting into a car with a drinking driver?  I would not.  Not even when it has nearly driven me round the bend on a couple of occasions.  But that was not Fear’s fault.  It was mine for allowing it to rule my thoughts over everything else that I knew was common sense.  Too much of a good thing can be bad for you, clearly, if you let it be.

So, what is the answer?

I think I have one plausible answer.  It works for me.  It does take a bit of getting used to and it needs a bit of discipline.  It is not a one-shot attempt kind of thing.  You see, Fear is not a separate human-type individual sitting your shoulder, still, Fear does hear and listens and has his own personality of sorts.  Mine tends to be quite clingy at times and I have come to think that maybe he needs me more than I need him.  I guess that’s why he hangs around longer than he should.  But on to my method. 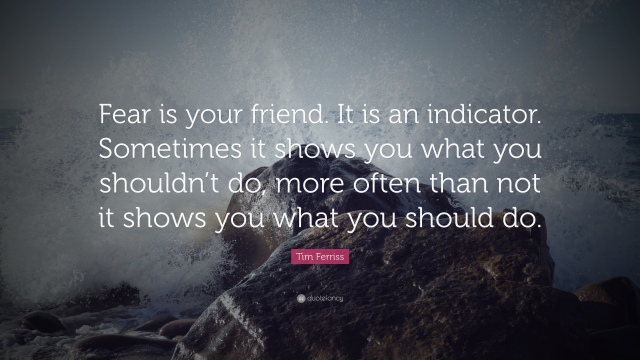 Fear, my friend.  I know you are a part of me.  We need not try to part ways, I have come to realise that yes, I need you.  You have been there at the right time for me and I do appreciate this.  However, it seems to me you tend to overstay your welcome and I find myself feeling fearful over some rather silly things.  Now you and I both know this is unnecessary.  What if I get fed up and stop listening to you and end up in trouble?  I would say you weren’t doing a very good job of things then, wouldn’t you?  So, let’s do this… you go sit over away from me and wait until you see some real danger.  When you do, please notify me. Until then, please stop waving small matters and imagined matters in my path.  This does me harm if nothing else.  I can sort out these little things without you.  Thank you so much for your real help in past and future.  We are friends, we just don’t need to be in each other’s pockets.

Afterwards, I feel absolutely wonderful.  I know he is still lurking but that is a good thing.  I am sure I will need him again in future.  But not because the rash on my arm might be something deadly – which it isn’t, or because of a million other little things that would only take a bit of common sense to fix.  This may or may not work for you.  If you really want it to, it will.  You’ll need to be assertive but kind.  No need shouting at Fear. And you may have to do this every day for a while until you get your Fear put into his place.  But the thing is, he will cool down and leave you in peace more and more.  And this is how I deal with fear.

I would love to read your comments on how you deal with your fear in the comments below!  Everyone has different ways of doing things and it’s always good to have varieties of ways.  Many thanks for reading and please don’t forget to like and share on social media!  Warmest blessings to all who wander this way x

Everything worth knowing, I learned from my Nana. I'm a sixty-six year old cunning woman who practises a solitary English hedgewitch life in as near the old ways as I can. I do not sacrifice small animals, neighbours, nor eat children. I'm more interested in visiting my ancestors on hedgewalks. And, I am owned entirely by my lovely feline companion, Pippa [Lady Philipa Cattington].
View all posts by Isabella →
This entry was posted in Business, Human Nature and tagged fear, how do i deal with fear, how do we subdue fear, how not to be afraid, how not to fear, how to get rid of fear, is bravery an absence of fear, the first duty of a man is subduing fear, why do we fear. Bookmark the permalink.

4 Responses to How Do I Deal with Fear?