I would like to dedicate this blog to my best friend, Liss, who was born under the sign of the Hackberry tree… whether she realises it or not, she has the traits bang on 😊

A what tree?? I can almost hear many of you say. Hackberry. It is a tree of the Druids horoscope / Gallic horoscope according to the Druidic calendar. The Hackberry is from 9th February – 18th February and 14th August – 23rd August. I don’t know why… yet. Trees and calendars are all still a work in progress for me. Many of both to learn about! However, do not confuse the Druidic Calendar/horoscope with the Celtic Tree Calendar / Birth tree horoscope I have previously written about. 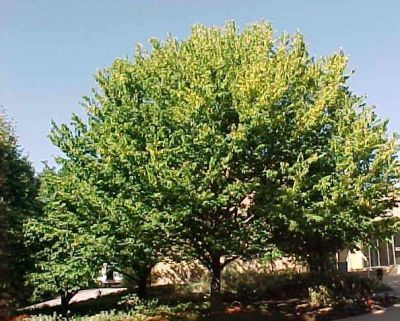 Hackberry [Celtis occidentalis] is a member of the Elm family. Hackberry is native to North America but is grown all over southern Europe and UK. It, unlike its other Elm cousins, is immune to Dutch Elm Disease and as the Elm population in the UK has dwindled so much due to this horrific tree disease, it is good to know the Hackberry goes unharmed by it. All related species are known to be associated with the Underworld.
Curiously enough, in the UK the Hackberry tree rarely grows beyond around 12 to 15 metres high, making it a fab little tree for gardens, however, in the Americas there are Hackberry trees which grow up to over 50 metres high! They are the same genus – it is just the soil difference, I suppose. But even more curiously, the everyday Elm tree grows to over 50 metres in the UK. Well, it’s a fact not all brothers and sisters are the same height in a family…there is always one at least whom is shorter!

As mentioned above, the Hackberry tree is the Druidic birth tree for those born between both 9th February – 18th February and 14th August – 23rd August. Traits of those who were born under the sign of Hackberry: impulsiveness, optimism, intelligence, ability to deduction. These people were born under the sign of Hackberry: Galileo Galilei, Darwin, Johann Wolfgang von Goethe, Brecht. It is a tree of nobility, pride, and dedication. A tree sign such as this one will not settle for less than what they obtain to achieve in their lifetime. Their strict dedication and vision is what inevitably makes them feel proud and great. – Druidry.org This, I believe, is a good segue into…

“Soon after joining Athens State College (now University) as Professor of Psychology, I introduced into the curriculum an eight-week remediation program called “Summer Start” designed for college applicants whose entrance exams did not qualify them for admission to a regular college program. The specially designed program included instruction in certain core subjects, along with counselling and tutoring.

As a part of the program’s counselling component, I introduced what was then an innovative strategy called Tree Power Infusion designed specifically to improve student academic performance. The strategy is based on the premise that our interactions with trees can provide a direct link to totally new sources of untapped potential, both within ourselves and beyond. For use in the procedure, I selected a large hackberry tree situated on campus near the stage entrance of McCandless Auditorium. The tree seemed particularly appropriate for use in the program because of its magnificence as well as the legend associated with it. According to the legend, the tree was planted around the turn of the last century in honour of the talented actress, Abigail Burns, who had performed in McCandless Auditorium and then met with tragic death enroot to her next engagement. Soon after her death, the bright image of Abigail appeared at a third-floor window of the building, where she is still often seen, particularly around midnight on November 12, the anniversary of her death.

Here’s the Tree Power Infusion procedure as used by our Summer Start students who named the hackberry tree Abigail:

Formulate your goals, and with your hands resting upon the selected tree, invite it in your own words to be your partner in achieving your stated goals.

Gently stroke the tree as you experience your connection to it and the responsiveness of the tree as your energies interact with it. Sense the vibrations of that interaction as the tree’s powerful energies permeate your total being.

With your hands still resting upon the tree, envision it as a powerful antenna piercing the unlimited powers of the universe. Again, state your goals and express your gratitude to the tree as your partner in achieving them.

Conclude the exercise with the affirmation: The energies of my being are balanced and attuned. I am endowed with limitless growth potential. Mentally, physically, and spiritually, I am fully empowered to achieve my highest goals.

Incredibly, all thirty students enrolled in Summer Start qualified at the end of the term for entrance into the college’s regular four-year degree program. As further testament of Summer Start’s success, all participants successfully completed the baccalaureate degree, with eleven of the thirty students graduating with honours. That initial Summer Start program was so successful that the college continued it for several years, with Tree Power Infusion remaining an essential component.

Although Tree Power Infusion was originally designed to improve student academic performance, it can be used with various trees for a wide range of personal empowerment goals, including losing weight, smoking cessation, building self-esteem, and rejuvenation, to mention but a few.”

As with all Elm-related trees, many of the powers of help can be utilised from one tree to the next. The Hackberry tree is a powerful grounding tree and persuades one to not only be at their personal best but to have strength in doing so. For a tree many have heard little about, it is a tree to be learned much from. 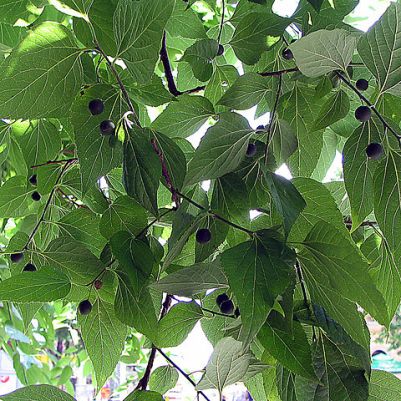 Edible parts of Hackberry: Fruit – raw. Very sweet and pleasant tasting, they can be eaten out of hand or can be used for making jellies, preserves etc. The fruit is often produced abundantly in Britain, it is about the size of a blackcurrant, but there is very little flesh surrounding a large seed and it is therefore a very fiddly crop. The flesh is dry and mealy but with a pleasant sweet taste. The fruit and seed can be ground up finely together and used as a flavouring. The Native Americans ate them with parched corn.
Other uses of the herb: A dye is obtained from the roots. Fairly wind-tolerant, it can be planted as part of a shelterbelt. Wood – rather soft, weak, coarse-grained, heavy. It is sometimes used commercially for cheap furniture, veneer, fencing fuel etc. It is a valuable tree for both honey bees and butterflies.

Many thanks for reading our blog today! I hope you have found it useful in your practise and if you have, please share it via the social media buttons below and give us a 5-star rating and a like. Also, don’t miss a blog by signing up to receive email notification when our bi-weekly blog is published. Many warm blessings upon all x