From the Wortcunner’s Cabinet – Feverfew 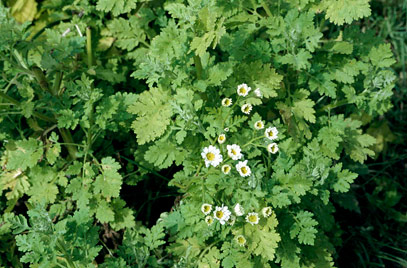 Feverfew [Tanacetum parthenium], to the untrained eye, looks a lot like Chamomile, except its flowers are not conical but rather flat-topped and its leaves resemble those of Coriander. They have a peculiar, strongly aromatic but not exactly pleasant smell, which is why bees avoid it and it is generally very useful as an insect repellent. It was thought to improve upon many ills suffered by all, particularly women. It was used to put off the pains and maladies of PMT/PMS and up til recently was believed to ward off migraines. There is no factual evidence that Feverfew can do this, however, if it works for some, it will still be used as such.

Magickal and Folklore
Together with Red Nettle and Waybroad [Plantain], Feverfew was a traditional remedy for elf-shot in late Anglo-Saxon culture.

It is considered to be invaluable for general protection work, especially when magical attack is involved.

Feverfew is excellent for warding off binding love magick and for healing those suffering from dejection due to love problems.

Some witches make a decoction of Feverfew and after straining, spray magical tools with it to purify them.

Feverfew is planted around the house for purification and protection.

In ancient folklore Feverfew was believed to grow from leftovers that had been ritually set aside at the Christmas dinner table and had been thrown out into the garden a few days later.

An amulet of feverfew can be worn to prevent all afflictions to the head and to keep one’s bearings straight. 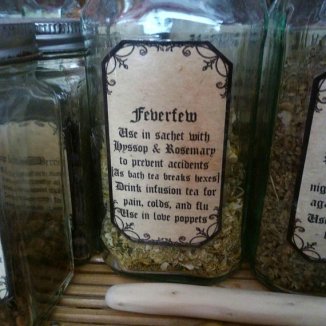 My dried Feverfew ~ photo by i.macy

Apart from preventing migraines [for which fresh feverfew leaves are better], the ancients also recommend it for melancholy and depression. It can help in cases of dizziness and vertigo, and may allay nerve pain, offering cooling, analgesic relief to affected areas. The ancients also praise it highly as a woman’s herb, effective to regulate menstruation, bring on delayed periods, expel the afterbirth, and cure inward and outward inflammations of the female reproductive organs, especially a hardened or prolapsed uterus. It also used to be used for coughs and fevers. Externally it was applied as a cosmetic agent to remove spots. Do not use during pregnancy.

Thank you for reading and sorry it’s a bit short, however, it’s a bit busy round here this week. If you will, please, share via social media with the buttons below and we hope you’ve enjoyed. Warmest blessings to all x