From the Wortcunner’s Cabinet – Bergamot 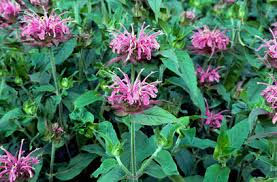 Bergamot is originally native to Morocco and tropical Asia it is grown commercially in the Ivory Coast and is extensively cultivated in Southern Italy. It was first cultivated around Bergamo, from where it takes its name. It would seem it took a fair number of years before it immigrated to other countries. During my research into Bergamot I delved into my Culpeper’s English Physician and Complete Herbal which has no mention of Bergamot, nor any of its other names. As this was written in the 17th century it would seem that Bergamot had not made it to England yet, however, it apparently had arrived in North America – possibly due to the bringing of slaves from Africa where it was grown – and I found this from another site [Bee Balm is one of Bergamot’s American names]: “Bee Balm was used as a medicinal plant extensively by Native Americans who recognized four varieties that had different odors. Wild Bergamot was used also as an active diaphoretic (sweat inducer) for ceremonial sweat lodges. A decoction of the herb was made into hair pomade.”
In a bit more American folklore and history about Bergamot: “The red variety [of Bergamot] is commonly known as Oswego Tea. It was used by colonists in place of English Tea after the Boston Tea Party, when they threw the English tea in the harbor to protest the high taxes imposed on it by the British.” 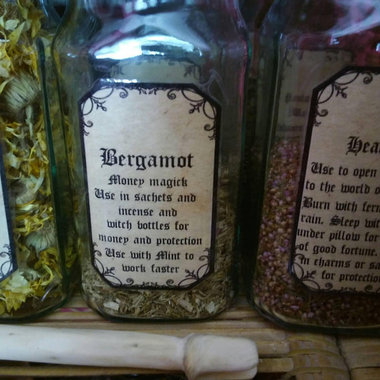 Bergamot, whether used as the herb itself or as an oil, is one of the most-used herbs when trying to draw wealth and abundance to ones’ self. There are many ways in which to use it to that end. You can sprinkle a bit of the herb into your wallet amongst your folding money or in your coin purse. In money attraction or luck spells you can make a loose incense with Bergamot and other wealth-drawing herbs and woods with a small drop or two of Bergamot oil [or Patchouli oil] and burn it on a charcoal disc during your spell work. For gambling luck or money luck in general, carry a small sachet full of Bergamot and other money/luck drawing herbs is very effective. Bergamot is one of our nine herbs/woods/flowers that we put into our Prosperity Witch Bottle that we sell in our shop. We use an abundance of Bergamot as we have always had wonderful results from it.

Bergamot is not only for wealth. You can use it in all of the same ways above for protection, hex breaking, courage, and mood-lifting. You may also sprinkle it into your bath water for hex-breaking. For general good spirits, mood-lifting, balance, and confidence, mix Bergamot into a potpourri with other mood enhancing herbs then place bowls full of the potpourri around your home.

Keep in mind that as a multi-purpose herb you must enchant the herb to do whichever of its powers you require most from it for each spell or other use.

Healing:
Bergamot’s leaves, flowers, and stems are used in holistic medicine as an antiseptic, carminative, diaphoretic, diuretic, and stimulant. An infusion is medicinally used internally in the treatment of colds, catarrh, headaches, and gastric disorders; to reduce low fevers and soothe sore throat, and to relieve flatulence, nausea, menstrual pain, and insomnia. Steam inhalation of the plant can be used for sore throats, and bronchial catarrh [inflammation of the mucus membrane, causing an increased flow of mucus]. Externally, it is a medicinal application for skin eruptions and infections. Tea brewed of Bergamot is a wonderful way to settle a dicky tummy.

Many thanks for reading our blog! We hope you enjoyed it and would very much appreciate if you would share us using the social media buttons below. Please give us a like and a 5-star rating. Sign up for our mailing list so you will know when a new blog hits the press! The most we publish is two per week so you need not worry about us filling your inbox 😊 Warmest blessings to all x

2 Responses to From the Wortcunner’s Cabinet – Bergamot