Crystal of the Week – Emerald

As Emerald is the birthstone for May babies, of which I am one, I thought it might be nice to talk about them. For much of my younger life I only regarded Emerald the same as I would Diamond or Sapphire – it was an expensive stone and only for engagement rings or a small chip to wear in a solitaire setting as your birthstone ring. But, back in those days I had not really started digging into why certain “rocks” and stones could make a person feel a certain way. 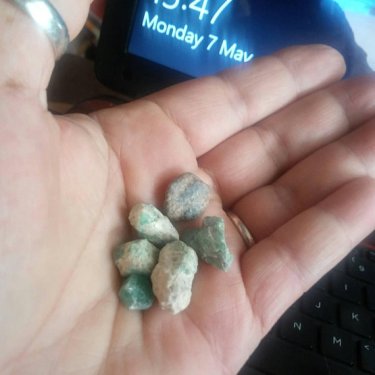 My rough Emeralds ~ photo by i.macy

Emerald is called the “Stone of Eternal Love”. It is one of the reasons Prince Albert chose this stone as his engagement ring to Queen Victoria, and the other was that it was her birthstone. In fact, the Emerald was also set in a ring resembling a snake, another representation of eternal love. As with everything the young Victoria wore, jewellery included, it was snapped up as the fashion of the day and birthstone engagement rings became the Victorian standard, not to mention that they now existed full stop because of Albert’s loving gesture to his bride-to-be. Up until 1840, engagement rings were not a “thing”.

The Emerald has been around since forever. It was found to be sold in the markets of Babylon as early as 4000 BCE. The early Chaldeans believed Emeralds contained a Goddess. Cleopatra favoured the Emerald above all and the Emerald mines in Upper Egypt, rediscovered a hundred years ago, are some of the oldest in the world and were called Cleopatra’s mines for her love of the stone. Emeralds were considered a symbol of eternal life in ancient Egypt and carried as talismans.

Magickal
As Emerald is a “month of love” stone, being Venus as the ruler of all Taureans, it is a stone which can help re-ignite passions. It is said that to call back an estranged love, speak the words you wish to say holding the stone close to your lips and seal it in an envelope. Emerald likewise helps with the break-up of a relationship. Worn near the heart, it is optimal for attracting love to you.

It was once believed that Emerald talismans could calm storms, prevent miscarriages, bring good luck, and when placed under the tongue, allow one to prophesy, useful in past life recall. Protects from domestic violence. Banishes nightmares. Protects from psychic attack.

Healing
Emerald aids eyesight, a strong healer of the heart. It also may be useful in healing the lungs, thymus, pancreas, and the lymphatic system. Helps ease transitions in menopause and can help in healing from an infectious illness.

Emerald shields social workers and counsellors from being worn down. It is also a very good stone for helping young people feel better about themselves from being bullied and teased and restores their positive self-esteem. You don’t need an expensive Emerald ring for this purpose as you can purchase turmblestone Emeralds. Opaque stones should not be used for meditation or working with emotions. The Emerald is a stone of regeneration when it comes to mental healing – it encourages love and compassion for one’s self as well as for others.

Correspondences
Planetary: Venus
Zodiac: Taurus
Element: Earth
Powers: Love
Chakra: Heart
Deity: Venus, Annapurna, Astarte, Thoth, Ceres, Isis, Surdurjaya, Vishnu, Banbha, Eriu, and Fodla
Tarot: The High Priestess*
*Not try to be funny but The High Priestess card has always spoken to me and I never knew why til I did further research on this stunning stone and found the High Priestess was a correspondence of the Emerald.  Read my blog about this.

Many thanks for reading and we hope you’ve enjoyed it and can take a little useful information from here. If you have, please do us the honour of liking our offering and/or giving us a 5-star rating. We also love to be shared via the social media buttons below 😊 Warmest blessings to everyone x