Happy Beltane, everyone! Or, if you are in The Land Down Under, Happy Samhain! I thought it appropriate to re-visit our Hawthorn tree blog today as it is traditionally used as the “May Pole” being today is also May Day.  And then I get thinking “what more can I say about the wonderful Hawthorn?”.  I really couldn’t think of  a thing, however, as I sat researching a herb I plan on writing about by reading in Nicholas Culpeper’s herbal, The English Physician, I ran across his passage on Hawthorn! What better way to begin my re-blog than to quote the words of the foremost herbalist of his day and still popular in our time? So, forgive the misspellings, for the English language had not quite been tamed yet, or, the authors of many of the olde worldy books just could not spell! Without further hesitation, I give you Nicholas Culpeper’s take on Hawthorn:

It is not my intention to trouble you with a description of this tree, which is so well known that it needs none.  It is ordinarily but a hedge bush, although being pruned and dressed, it grows to be a tree of reasonable height.

As for the Hawthorn Tree at Glastonbury, which is said to flower yearly on Christmas-day, it rather shews the superstition of those that observe it for the time of its flowering, than any great wonder, since the like may be found in divers other places of this land; as in Whey-street in Romney March, and near unto Nantwich in Cheshire, by a place called White Green, where it flowers about Christmas and May.  If the weather be frosty, it flowers not until January, or that the hard weather be over.

Government and virtues.]  It is a tree of Mars.  The seeds in the berries beaten to powder being drank in wine, are held singularly good against the [kidney] stone, and they are good for the dropsy.  The distilled water of the flowers stays the lask.  The seed cleared from the down, bruised and boiled in wine, and drank is good for inward tormenting pains.  If cloths and sponges be wet in the distilled water, and applied to any place wherein thorns and splinters, or the like, do abide in the flesh, it will notably draw them forth.

And thus you see the thorn gives a medicine for his own pricking and so doth almost everything else.” ~ Nicholas Culpeper, The English Physician and Complete Herbal, 16th century

Culpeper’s way was to assign a planet to every tree, flower, and wort and every part of the human body was assigned a planet as well. If a wort or tree was ruled by Mars you only need to use it for healing the part of the body also ruled by Mars.  This was not something you took lightly in those days.  He spent most of his life researching by astrology, biology, and the science of making people well again. On the top of it all, he was quite a prolific writing.  Although centuries have passed since  this writing, we have found all to be true the things Culpeper learned in his research.  Many times when I am writing about a herb I consult The English Physician to see what Culpeper made of the herb back in his time and I find that we are still, for instance, using Angelica to help with stomach ailments or Cherry to cure a sore throat or chest congestion.  It goes to prove they did get it right in those days and we owe Culpeper and many others a huge debt of gratitude for what they learned and left with us.

Today is May Day and the first day of Beltane.  And in many places a tall post of Hawthorn may be being used today for a May Pole.  But I do hope in preparing the Hawthorn for its celebratory ritual that people remembered to use all of the Hawthorn and not to waste it…keeping leaves, bark, and so forth for healing potions or protections.

So, please enjoy the rest of the blog, if you have never read it before, and if you have, I hope you have enjoyed the re-visit with new information. Happy May Day to all! 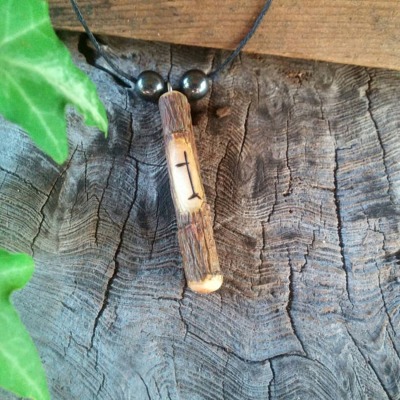 The Hawthorn tree represents the sixth month of the Celtic Tree calendar, 13 May – 9 June, and this period is represented by the Ogham for this tree, which is also the 6th letter of the ogham alphabet, Huath (Huathe, Uath). The Hawthorn Tree, or Mayflower tree, is sacred to Roman Goddess Flora, Celtic Goddesses Aine and Brigid, along with the Manx – Celtic God Manannàn Mac Leirr. This Ogham symbol is used in Celtic Reiki and its essence represents the energy of cleansing and preparation. It clears the mind of negative thoughts and mental confusion, offering clarity: it gives patience and offers stillness. The Hawthorn tree is masculine and usually, but not always, grows in hedges, but a lone Hawthorn tree, growing on a hill is a portal to the world of faery and is also considered one of the three trees of the Faery Triad, including Oak and Ash. We offer a Hawthorn Ogham pendant in our Etsy shop for those born in the lovely month of May, or in fact, to anyone who loves Hawthorn.

Hawthorn Faery
“Along with Oak and Ash, Hawthorn forms the “faery triad” that is especially inviting to the fae. Hawthorn is, in some ways, the faery tree, forming a portal to the faery realm and holding strong magick. The Hawthorn faery offers access to the Other-World, but also protects the unwary, so it is important to be patient with this spirit. She can enchant your life, bringing growth and fertility to all areas, and when the Hawthorn flowers in spring, it represents the bridal gown of the young Goddess. Hawthorn is sacred to the Welsh sun goddess Olwen, the “white lady of the day.” Where she trod she left white footprints on hawthorn, and her father, Yspaddaden Pencawr, was “Giant Hawthorn.” Thirteen tasks were demanded of her suitor, Culhwych, before he could marry her and overcome the power of the giant. Thirteen is a number associated with the moon, for the moon makes 13 circuits of the zodiac to one of the sun. Thus, the Hawthorn suggests union of sun and moon, male and female. The Hawthorn faery promises cleansing, fulfilment, guardianship, and fertility. Keeping grounded and practical is the best way to access her and use her gifts.” ~ The Faery Bible by Teresa Moorey

In Ireland, Hawthorns have always been highly respected as faery trees. They were often referred to as ‘gentle bushes’ after the custom of not naming faeries directly out of respect. Solitary thorns were known as the faeries’ Trysting Trees, and frequently grew on barrows and tumps or at crossroads, thought to be a favourite location of pagan altars.

Folklore: Much of the folklore attached to it seems to come from the fact that the tree is covered in long branches of early, white blossom around the time of Beltane – the First of May. In England, the Hawthorn is known as the Mayflower tree in honour of the month during which it blooms. Symbolising hope, it was the name the Pilgrims took for their famous ship, The Mayflower. 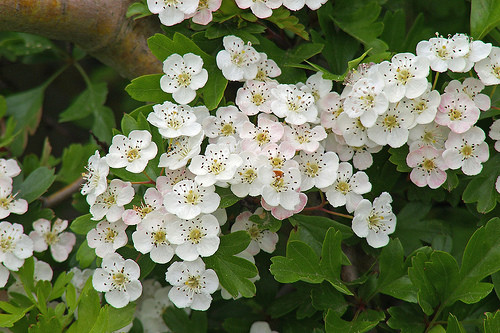 If 1st of May seems early and the blossom is not ready – remember that the British calendar was changed and went forward 12 / 13 days in 1752 – trees have long memories and so work to the ancient dates! This is evident as well in Hawthorn’s place in the Ogham Tree Calendar – beginning now on 13th May – it would once have started on May 1st. Hawthorn is still prevalent in May Day celebrations, whatever the case.

But whilst Hawthorn was a propitious tree at May-time, in other circumstances it was considered unlucky. Witches were supposed to make their brooms from it, and in some parts, it was equated with the abhorred Elder, as in the rhyme:

Hawthorn bloom and elder-flowers
Will fill a house with evil powers.

In magick, Hawthorn is known as a psychic shield that can lift the spirits, and a little charm of the wood is a thoughtful gift for a friend going through a time of vulnerability or depression. It is also especially effective against malevolent spirits.

Protection Spell:
Carefully gather a few thorns from the tree.
“On a piece of paper, write the name of the person or situation from which you seek protection, and then wrap it around the thorns. Bury this in the ground – if possible near the tree from which the thorns were collected.” ~ Whispers from the Woods, by Sandra Kynes

“A hundred years I slept beneath a thorn
Until the tree was root and branches of my thought,
Until white petals blossomed in my crown.”
From The Traveller ~ by Kathleen Raine

I hope you have enjoyed the re-visit. If so, please give us a share via the social media buttons below and perhaps a 5-star rating above and it would be most welcome if you would give our blog a like. Be sure to sign up to get updates when our new blogs come out! Many thanks for reading and warmest blessings x

The Fairy Bible, by Teresa Mooney

The English Physician and Complete Herbal, by Nicholas Culpeper