Shunglite, the Stone of Life

Ah, Shungite…the stone of life! Shungite was first discovered in Shunga, Russia. No prises given for guessing where Shungite got its name 😊

The Shungite stone has healing properties quite unlike any other. It has been used to infuse drinking water since Czar Peter’s time – yes, that would be the famous Peter the Great, Peter I or Peter Alexeyevich. He was rumoured to prefer a Shungite-infused water for drinking which led to his frequent travels to Karelia, where Shunga is located. We can now enjoy drinking the mineral rich water without quite so much bother!

Shungite is a soft, carbon-based stone whose origins date back about 2 billion years -that’s a lot of history to drink in! – for in its pure form it naturally contains small amounts of “fullerenes” which are hollow carbon structures that contribute to some of Shungite’s metaphysical lore. It is scientifically believed that it has positive effects on health and science continues to probe this belief. 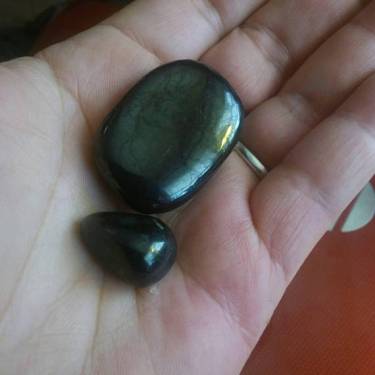 my Shungite palm stone and tumble stone ~ photo by i.macy

It is a stone of alchemy…as mentioned, it has been used for ages to infuse with water for drinking intending to restore good health. Firstly, it purifies water. But then, it also changes the water, in such a way to normalise many common complaints people are prone to have…everything from arthritis to skin disease. It is also said to help with heart problems, hair issues, and allergies. You can make your own infusion very simply: Leave a Shungite stone in a glass of water covered overnight or in a bottle of water, capped [do keep in mind this is not optimal as the water can absorb chemicals from the plastic bottle]. The next day, pour off the water into another glass or bottle and drink it. You can also purchase bags of the crushed Shungite for a filtering system. Either way, it can do you a power of good. Another fact: You may use the normal Shungite stones in your drinking water, however, it is better to use the “Elite Shungite” for this purpose as it has 92 to 98% carbon whilst regular Shungite is usually only about 60% carbon-based.

Shungite is a stone of protection…it’s a black stone and black is commonly a protective colour in western witchcraft. It protectively “cloaks” during spell work to keep the practitioner safe and for lack of better words, “hoovers” up the negative and evil energy which may be surrounding us. It is also helpful in amplifying your psychic powers. In general, Shungite is a brilliant stone to carry with you as it always aims to prevent the negativity of people and the world around you from shattering your positivity.

What do you do to cleanse this workhorse of a stone from all the negativity it draws in? Nothing! The absolute beauty of Shungite is that, you can start working with it right out of the box! It never holds in the negativities and evils, rather, it cleanses them and releases them back as positive vibrations. When you receive your Shungite, it is not laden with other’s negativities whom have handled it. However, it can have their germs so before using in an infusion, please do wash it! It is recommended to re-charge your Shungite in the Sun about every six months. Moon re-charging not necessary but you may do so if you like.

my Shungite pyramid ~photo by i.macy

Shungite also shields against Electromagnetic Radiation [Computers, TV’s, Mobile Phones] and I have read where some folk purchase slender slivers of Shungite to place between them and their phones! I haven’t tried this yet, but it can’t hurt. My son has a lovely Shungite pyramid which sits between him and his television for all the hours he spends gaming. I am hoping to invest some day in a laptop tray which has Shungite in it for all the hours I’m on my laptop…but I imagine I’m a bit late on that idea as I’ve been using a laptop for years and…. well, if there is damage, it is done by now, I would think! Still, for the readers, please think about this for yourselves.

I could write a book about what I love about Shungite but I do have to end this here. You’ll not go wrong by inviting this powerful stone into your life. Depending upon what you wish to use it for, it is a fairly affordable stone, unless you’re buying the Elite Shungite, but it is well worth it. It is, if for no other reason, a fabulous grounding stone and your area where you keep it will feel lighter and less negative. Many thanks for reading and warmest blessings x

Please do not use this as a cure.  If you believe you are afflicted with a disease, please see your doctor and adhere to his or her advice.  I do not claim any medical knowledge and only promote Shungite or any stone or crystal as a possible enhancer to your proper medical regime.

The Crystal Bible by Judy Hall