Samhain: The Magick of Blackthorn

It is the tree of Samhain. In the Celtic Birth Tree Calendar, Blackthorn is 31st October, beginning of Samhain and more recently associated with Halloween. Its ogham name is Straif, Chieftain tree.  It is not a CBT Calendar birth tree, therefore there will be no “zodiac” reading associated with Blackthorn, although some traditions believe those born upon this day to be born from something less than angelic. We shall lay superstitions and old beliefs aside to look at Blackthorn as the wonderfully magickal and protective tree that it is.

“The holy day of Samhain is, in the Celtic tradition, the first day of Winter: a time of sacrifice, divination for the New Year, communion with the dead, of endings and rest. On this night the world of spirits, ancestors and mortals might meet.

Within the mythic cycle of the Goddess as Crone, she deepens into Herself and enters the dreamtime, the place between the worlds where past, present and future exist simultaneously. The season invites you to enter a place of stillness and simply be where you are: not moving forward or backward but utterly present, suspended in the space between past and future. It is here that you may hear Her voice in the crackling fire, rain, and wind.

Review the year that has passed with introspection and retrospection. Commune with your ancestors and honour your beloved dead. Remember your sisters who perished in the Burning Times, and commit yourself to the struggle for justice. Divine and ask the Fates for blessings in the coming year. What do you leave behind in the year that has passed, and what do you wish to take with you? How will you prepare to listen to the Old Wise One within?” ~ Women’s Rites, Women’s Mysteries by Ruth Barrett, and We’ Moon

The Blackthorn tree is esoterically known as both the Mother of the Woods and the Dark Crone of the Woods.  It is found primarily in the British Isles and is generally part of hedgerows and in thickets. You’ll often find it alongside Elder and Hawthorn in the hedgerows bordering many farmlands. It is a very difficult tree…more like a shrub than tree, traditionally never becoming taller than thirteen feet in height…to physically come close to. And if you do, mind the thorns or “spines”… 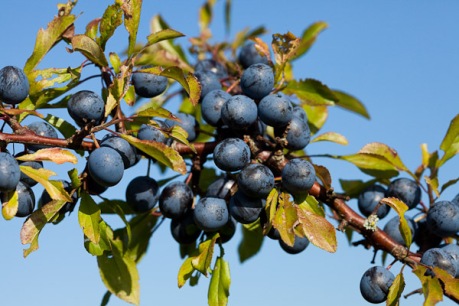 The Blackthorn does produce a fruit, called sloes, and is often made into sloe berry jam and sloe gin.  The berries have medicinal use as well which we’ll look at later.

Blackthorn is generally depicted as an ill omen throughout Britain and even Europe, however, the Celtic people formed its most sinister reputation…a hard, cold winter would be referred to as a “Blackthorn winter” and the Ogham letter  straif is where the English word “strife” is derived from. Drawing the straif Ogham stave [made of Blackthorn wood, of course!] means the diviner is in for a thorny go of things. The drawing of the stave also indicates the actions of fate in your life, something that cannot be avoided but must be faced and dealt with. Blackthorn gives you the strength to accept and persevere in the face of adversity.

Blackthorn is associated with death quite frequently. Samhain is the death of the old year whilst hailing in the new.

In the Irish legend, the Pursuit of Diarmaid and Gráinne, a passage describes Sadhbh eating sloe berries and becoming pregnant as a result. She gave birth to a son who was born with a lump on his head. The lump turned out to be a worm or snake. The snake was eventually killed in sacrifice for another man. In The Sword of Oscar, sloe berries are part of a sacrificial theme as well. Blackthorn’s theme in traditional stories often indicate a warrior’s death in service to the High King or tribe.

In the Word Ogham of Cúchulainn Blackthorn is ‘an arrow’s mist’ and ‘smoke drifting up from the fire.’ These are both kennings for death.

Blackthorn is used for purification, as well as protection, ridding the atmosphere of negative energy. It deals the issues on a Karmic level, which cannot be avoided. Meditating on Blackthorn can purify our minds of negative thoughts and impulses at the deepest level of our psyche. It can aid us in combating fear, depression, and anger. The thorns of the Blackthorn can be imagined lancing the built-up abscess of negative thoughts, and release the emotional toxins, which can then begin to heal. Using the gentler sister tree, Hawthorn, in conjunction with Blackthorn, can aid the process of healing.

Traditionally, Blackthorn is used in protection against evil, creating boundaries, purifying, confronting our own dark side. Blackthorn dispels negativity, toxins, old wounds, and impurities. It can be used in exorcisms. It is associated with chthonic and protective deities.

Two of my Blackthorn spines…one is 3″ long! Photo by i.macy

The spines can be used as pins to stick in a poppet. A wand or staff can be used for help in exorcisms or for protection from fire and for general protection.  A staff can be used to make wishes, and carrying the wand or staff protects one from evil. The wood makes a good divining rod. Often the Blackthorn wand is called a “blasting rod” for the power is so intense. An ideal wand for casting spells against enemies.

Carefully gather a few thorns from the tree.

On a piece of paper,

write the name of the person or situation

from which you seek protection,

and then wrap it around the thorns.

Bury this in the ground – if possible near the tree

from which the thorns were collected.

The fruit and leaves contain Vitamin C, organic acids, tannins, and sugars. Steep the flowers for a diuretic, tonic, and laxative. The dried fruits can treat bladder, kidney and stomach ailments. Boil the leaves for a mouthwash or to sooth the throat from tonsillitis or laryngitis.

Symbolism:  The inevitability of Death, Protection and Revenge, Strife and Negativity,

The Balance between light and darkness.

Many thanks for reading.  Have a blessed Samhain and warmest blessings to all x

Women’s Rites, Women’s Mysteries by Ruth Barrett, and We’ Moon