What is the Difference Between Amulets and Talismans?

You may notice when you see our tweets that we have similar-looking items that we sell, however, one may be called an “amulet” whilst the other is called a “talisman”. I get the occasional query as to what makes one but not the other. Think of it this way: they are both regarded as “charms” but the amulet wards off whilst the talisman empowers. An amulet wards off evil, bad luck, and the like but the talisman is usually specific to something the holder/wearer desires, such as to help empower that person with good luck, good health, and assorted abilities.

Amulets can be almost anything such as a coin, a ring, or garlic (think of warding off vampires!). When a bride puts a sixpence in her shoe on her wedding day she is warding off the many number of dreadful things that can happen rather than being brought good luck as many would think. The original reasoning behind the sixpence in her shoe was to protect the bride and her groom. As time went on Mothers of brides insisted that their daughters have a sixpence “for luck”.  Still, they are known as amulets. 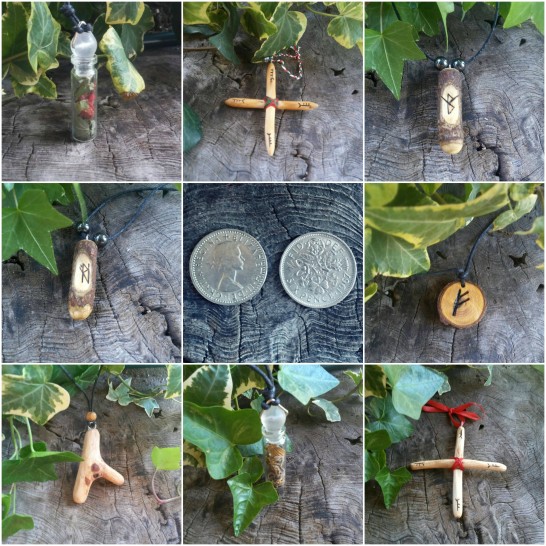 The talisman can also be almost anything, as well, if it is charged with the purpose of empowering its owner with additional ability. When I create a talisman for a specific purpose such as our Magnolia medical healing necklace or the Magnolia personal healing necklace, it is with great thought to increasing the power of the charm by using Magnolia as this is known as a complete healing tree. As you may have read in my earlier blog about the Magnolia tree, there are many parts which are used in medicine, both scientific and holistic. Simply stroking the bark of the Magnolia tree brings calmness so it is useful for anxiety. But back to the point of the talismans is that one is to increase strength and healing whilst dealing with scientific medical procedures like testing and chemo- or radio-therapy and the personal healing is more suited to the holistic healing. The pendants are even metal-free so they can be left on whilst being x-rayed or for scans. And, of course, it’s convenient if you have an attack of nerves for all you need do is stroke the bark.

Many say that talismans are “generally” made from gemstones or crystals and they can be. I have several crystals of different abilities which I may carry one or several around with me depending upon what kind of help I need in a day. My cat, Chili even has her own crystals which help with pain and other assorted healing necessities. Some also seem to be of the school of thought which believes all amulets are in a natural form (non-man-made) whilst the talisman is always man-made. I personally do not see how anybody can come to that conclusion as crystals/stones are as “natural” as can be but can give the power to you to love, to be calm, to rise above many things. By the same reasoning an amulet can be man-made or natural. The sixpence is definitely man-made, however, there are natural crystals which are protective and ward off evil/bad luck, therefore, an amulet.

In conclusion, an amulet or a talisman can be anything you like, whether nature-given or man-made. Just remember to do your research and be certain that what you use for an amulet will protect you and ward off evil and assorted terrible things whilst your talisman can help you to achieve a standard which you do not feel you possess otherwise. As always, thank you for reading and many blessings x

Everything worth knowing, I learned from my Nana. I'm a sixty-four year old cunning woman who practises a solitary English hedgewitch life in as near the old ways as I can. I do not sacrifice small animals, neighbours, nor eat children. I'm more interested in visiting my ancestors on hedgewalks. And, I am owned entirely by my lovely feline companion, Pippa [Lady Philipa Cattington].
View all posts by Isabella →
This entry was posted in Amulets and charms, Crystals, gemstones, healing, Pagan, protection, Stones, Talismans, Wiccan, Witchcraft and tagged amulet, amulets and talismans, charms, empower, gemstones and crystals, good luck, holistic healing, magnolia, magnolia healing necklace, medical healing necklace, personal healing necklace, protection, sixpence, talisman, ward off evil, what is difference between amulets and talismans. Bookmark the permalink.