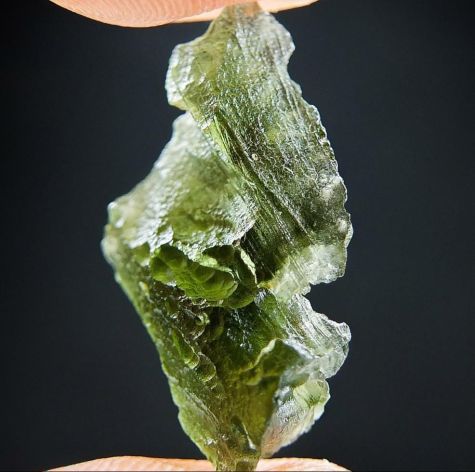 This Moldavite is in our Etsy Shop

All of our Moldavite has been ethically gathered by a friend who is a miner of these beautiful crystals in the Czech Republic. I won’t sell anything less than 100% real Moldavite. They are getting more rare all the time and it is said that mining for these stunning crystals will no longer exist within 10 years or less.

Shades of green, ranging from a yellowish hue to a brownish green are the most sought after Moldavite.

Moldavite is a member of the Tektite group of natural glasses formed from interplanetary collisions. From the Greek word tektos, meaning “molten,” Tektites are glassy mixtures of silicon dioxide, aluminium oxide and other metal oxides with an amorphous crystal structure. Unlike other Tektites from around the world which are tar black or brownish-black, translucent Moldavite colour range is varying shades green and is the only variety suitable for cutting and faceting as a gem.

Moldavite is not for everyone. As mentioned earlier, it’s a powerful crystal. Not everybody resonates with every crystal they hold, as we all know who work with them. And, if you do find you resonate with this crystal, you’ll have a friend for life and you’ll always want it with you. If you find you would like larger pieces of Moldavite in future, we will almost always have them as well as some with certification certificates.

It is believed Moldavite is a definite and powerful Chakra opener and activator, particularly resonating with the Heart, 3rd Eye, and Crown Chakras. Although its energy tends to first move to wherever it is most needed in the physical and etheric bodies, it will settle and centre in the heart. Moldavite is a great stone to work with on a personal and collective level in your healing work, practises, and meditations. Its transformative qualities, begins a process of energetic resonance throughout one’s entire being, thus raising the vibration.

It is also believed there are many benefits of this crystal, and exposure to it, including, activating the dream state when worn whilst sleeping, helping one to acclimate to the Earth plane environment if feeling not part of this world (especially in the case of Star Children), helps foster a deeper level of compassion and understanding for the human realities of the physical plane, aids in expansion of consciousness and rapid transformation in one’s life-aiding the release of those things that do not serve one’s highest path, visionary experiences, increased clarity, vibrational raising of both yourself and the Earth, energy cleansing, strengthens, aids in self discovery and enlightenment, cosmic and crystal consciousness, expansion, and even contact with inter-dimensional energies, and the list goes on… It is considered the only known gemstone of “extraterrestrial” origin (not of this Earth) and is associated with the Star card of the Tarot. But most importantly, it is a direct link to the Heart Chakra.

Some say wearing, or simply holding, a piece of Moldavite can produce many interesting and instantaneous reactions and experiences including that of heat flashes and emanating heat in general, that can not only be felt by the wearer, but those around, energy jolts, and vibrations throughout the day. It’s not a power to play with though, as since it’s vibration is so high, one not used to such exposure can find themselves feeling quite drained, as your vibrational energy quickens to catch up to match it. For this reason, it might be helpful to mentally prepare, when deciding to wear your Moldavite and you can also help to ground yourself as well by pairing it with other stones such as black tourmaline, smoky quartz, hematite, tiger eye, or whatever stone resonates grounding effects for you. Moldavite harmonises well with such stones as quartz, amethyst, rose quartz, citrine, tanzanite, larimar, sugililte, and dozens more.

We hope you find yourself a fan of Moldavite through one of ours!

Everything worth knowing, I learned from my Nana. I'm a sixty-four year old cunning woman who practises a solitary English hedgewitch life in as near the old ways as I can. I do not sacrifice small animals, neighbours, nor eat children. I'm more interested in visiting my ancestors on hedgewalks. And, I am owned entirely by my lovely feline companion, Pippa [Lady Philipa Cattington].
View all posts by Isabella →
This entry was posted in Business, Chakras, Crystals, Etsy, gemstones, Magickal, Meditation, Moldavite, Pagan, Stones, Wiccan and tagged certified moldavite, chakra stone, crystal, Czech Republic, genuine moldavite, green moldavite, green tektite, meditation stone, Moldavite, Nova Hospoda. Bookmark the permalink.